DR. STRANGELOVE or: how I stopped worrying and love the bombs 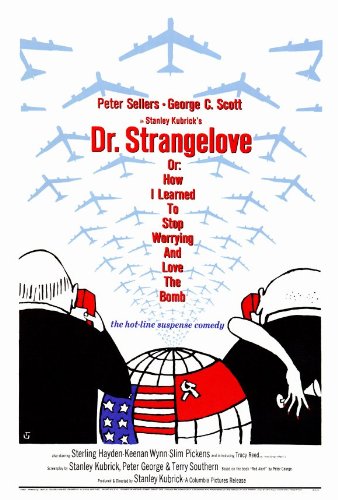 In 1964, with the Cuban Missile Crisis fresh in viewers’ minds, the Cold War at its frostiest, and the hydrogen bomb relatively new and frightening, Stanley Kubrick dared to make a film about what could happen if the wrong person pushed the wrong button — and played the situation for laughs. Dr. Strangelove’s jet-black satire (from a script by director Stanley Kubrick, Peter George, and Terry Southern) and a host of superb comic performances (including three from Peter Sellers) have kept the film fresh and entertaining, even as its issues have become (slightly) less timely. Loaded with thermonuclear weapons, a U.S. bomber piloted by Maj. T.J. “King” Kong (Slim Pickens) is on a routine flight pattern near the Soviet Union when they receive orders to commence Wing Attack Plan R, best summarized by Maj. Kong as “Nuclear combat! Toe to toe with the Russkies!” On the ground at Burpleson Air Force Base, Group Capt. Lionel Mandrake (Peter Sellers) notices nothing on the news about America being at war. Gen. Jack D. Ripper (Sterling Hayden) calmly informs him that he gave the command to attack the Soviet Union because it was high time someone did something about fluoridation, which is sapping Americans’ bodily fluids (and apparently has something to do with Ripper’s sexual dysfunction). Meanwhile, President Merkin Muffley (Sellers again) meets with his top Pentagon advisors, including super-hawk Gen. Buck Turgidson (George C. Scott), who sees this as an opportunity to do something about Communism in general and Russians in particular. However, the ante is upped considerably when Soviet ambassador de Sadesky (Peter Bull) informs Muffley and his staff of the latest innovation in Soviet weapons technology: a “Doomsday Machine” that will destroy the entire world if the Russians are attacked. ~ Mark Deming, Rovi

The film cuts back and forth mid-scene, and increases in rapidity as the film draws to an insane close, from three main set locations, each with their own distinctive camera styles:

The film is most memorable for three distinct roles :

Many sexual images and jokes are present throughout the film, from large phallic cigars, mating airplanes to the orgasmic atomic bomb that Kong rides between his legs. A lot of these are also found in the names which have sexual connotations or allegorical references that suggest the connection between war, sexual obsession and the male sex drive.

Mandrake → a medicinal plant root or herb said to encourage fertility, conception or potency – an aphrodisiac.

Ambassador Desadeski → named after the Marquis de Sade – a perverted sexual lover and sadist in the 18th century.

The bombs → Inscribed with “Dear John” and “Hi there”. 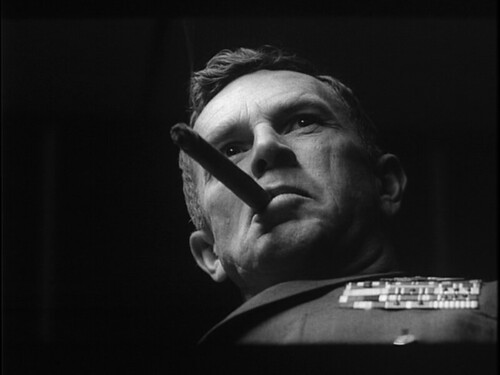 Despite not being the film I appreciate the most by a long shot, I believe that this film must be watched at least once, twice for better understanding if I’m being honest. Whether or not one likes the plot, it’s characters and the general atmosphere, one can’t deny the beauty of the plans and shots. I wasn’t impressed by the plot, however, it is a beautiful film with adequate and precise cinema shots which convey every intention of Kubrick, every emotion and information.