“Art isn’t only a painting. Art is anything that’s creative, passionate, and personal. And great art resonates with the viewer, not only with the creator. An artist is someone who uses bravery, insight, creativity, and boldness to challenge the status quo. And an artist takes it personally. Art is a personal gift that changes the recipient. The medium doesn’t matter. The intent does. Art is a personal act of courage, something one human does that creates change in another.”
– Seth Godin, Linchpin: Are You Indispensable?

It’s an artist’s role and should be an artist’s aspiration, as someone dotted with enough vision and imagination to envision a possible future, to challenge the status quo.

Massimiliano Gioni about Chris Ofili’s Black Virgin Mary: “If I were to say I want art to be loud and media-friendly forever, I would be lying,” he says. “The beauty of art is its continuous renewal. Maybe this is the ultimate provocation: that the very definition of art will constantly be renegotiated. That is what pisses some people off because it makes art almost impossible to define.”

In 1997, the Royal Academy staged an exhibition that shocked the world. Charles Saatchi, a private collector, invaded the halls of the Royal Academy with “gory images of dismembered limbs and explicit pornography” as it was summed up by the BBC, images which from the get-go generated controversy. Whether it was Damien Hirst’s pickled shark, Marc Quinn’s self-portrait made of his own frozen blood or Marcus Harvey’s painting of the serial killer Myra Hindley, this was a show that the public couldn’t ignore. It was the exhibition that prompted protests, vandalism and a media agitation, even provoking New York’s Mayor Rudolph W. Giuliani to try to evict the Brooklyn Museum, where the exhibition was held in 1999, from its building.

The advertising for the exhibition contained the following message: “The contents of this exhibition may cause shock, vomiting, confusion, panic, euphoria and anxiety”. Overall, the exhibition was presented as a pharmaceutical drug with secondary effects rather than a young artist’s exhibition. 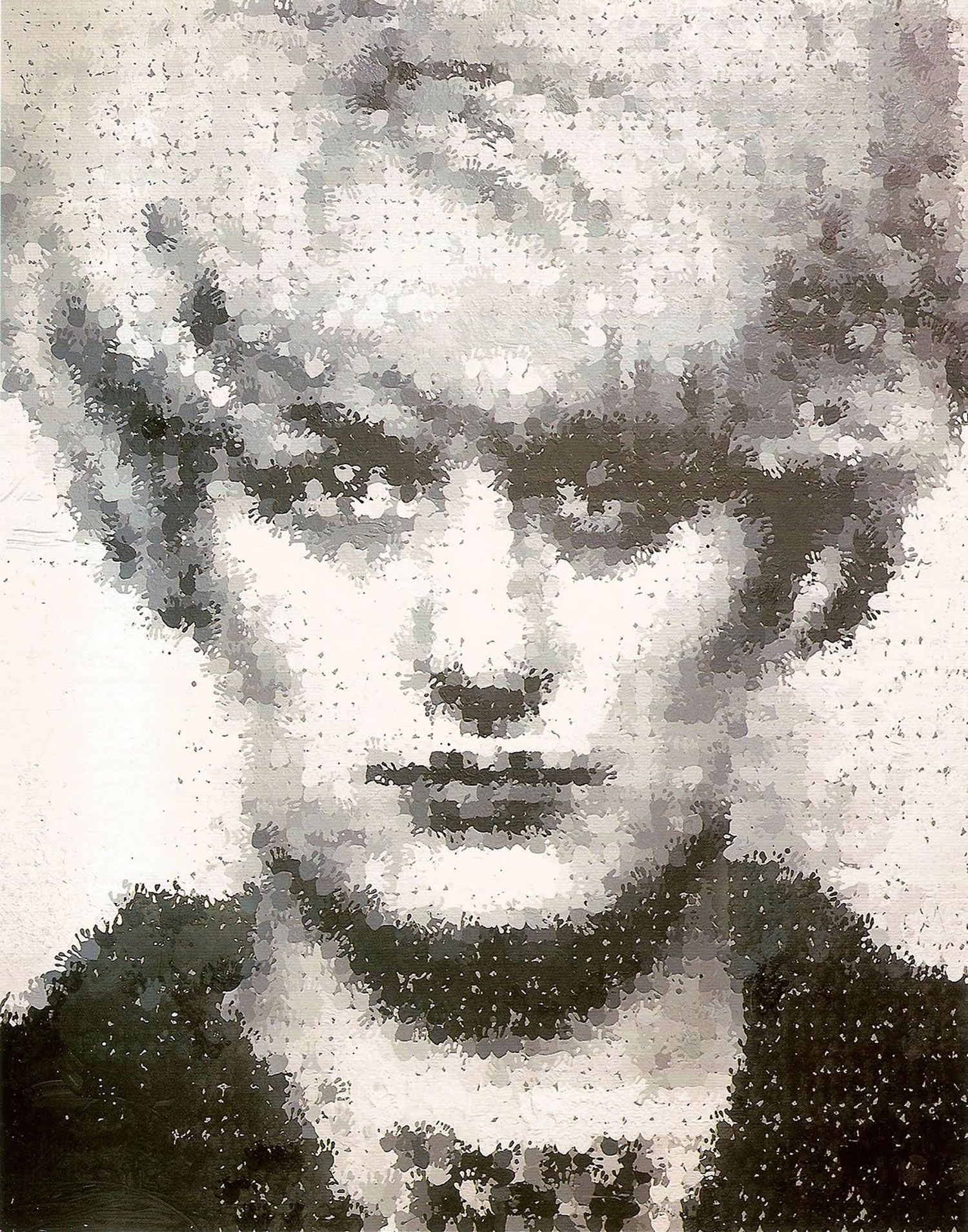 One of the works to have caused particular outrage was the image of the murderer, Myra Hindley, created from children’s handprints by Marcus Harvey. The Mothers Against Murder and Aggression protest group, accompanied by Winnie Johnson, the mother of one of Hindley’s victims, picketed the show asking for the portrait to be removed. Despite all the protest, the painting remained hanging. Two demonstrators hurled ink and eggs at the picture. There was strong opposition from within the Royal Academy too, as three Academicians resigned in protest.

Two years later, at the Brooklyn Museum, Sensation was once again met with vociferous protest. This time the controversy centred on a work by Chris Ofili, The Holy Virgin Mary. This painting showed a Madonna decorated with resin-covered elephant dung and surrounded by small collaged images of female genitalia from pornographic magazines.

New York Mayor, Giuliani called the exhibition “sick” stating that a “city-subsidized building” exhibiting “so-called works of art in which people are throwing elephant dung at a picture of the Virgin Mary is sick” and that “the city shouldn’t have to pay for sick stuff”, no matter that the artist’s intentions weren’t to desacralise nor that elephant dung is actually sacred in some African cultures. About a month after the opening of the exhibition, a 72-year-old retired teacher slipped behind the protective Plexiglas shield and smeared white paint across the surface of the Holy Virgin Mary.

The exhibition was the beginning of a conflict between Giuliani and Catholic groups on the one side and the Brooklyn Museum, backed by the lawyer Floyd Abrams, on the other. At the core of the debate was the serious question of whether public funding could be withdrawn from a museum because of the works displayed inside were seen as offensive.

Despite or because of the controversy, Sensation attracted record numbers of visitors and launched the careers of many of the artists that it exhibited. Many critics view the exhibition as one of the most significant exhibitions of contemporary art in the 20th Century – an exhibition, which challenged the boundaries of what was acceptable to represent in art, and the manner in which these ideas could be presented.

Edith Devaney, who worked at the RA during Sensation and is now the institution’s contemporary curator, argues that Sensation led the way to more contemporary art at major museums, as prior to it ‘the thinking was that only Old Master and Impressionist exhibitions could deliver good audience numbers’.

Others believe that the whole Sensation exhibition controversy was just a clever marketing trick by an exceptional ad-man-turned-art-dealer and proof of the adage that all publicity is good publicity. Nonetheless, mere publicity stunt or not, it is one of the most infamous and controversial exhibitions in recent years.

But is it Avant-Garde? Does Avant-Garde still exist? Is it still a thing?

No, because what would’ve been called Avant-Garde a few decades back is just business today.

Sensation was said to be the beginning of something, the moment where British artists would be at the forefront of innovation like the French had been in the 19th century and the Americans in the second part of the 20th century. On the contrary, looking back on it now, it appears as though it the exhibition was the last authentic breaths of the avant-garde movement, perhaps that movement had died long before Sensation came around and the more I think about it, the more I am convinced that we were hanging on to the remains of a movement that had shaped the beginning of the 20th century but was no more, and hasn’t been for a long time now.

Around the end of the 70s, the avant-garde lost most of its energy. Art was no longer defined by its urge towards novelty. Instead, it reorientated itself towards what already existed in the recent past and thus was born ‘appropriation’ as a paradoxically innovative art.

Back to the Sensation exhibition, what rendered it truly sensational was the mayor’s reaction.

All publicity is good publicity.

“I threw the bottle rack and the urinal into their faces as a challenge, and now they admire them for their aesthetic beauty.”
– Marcel Duchamp (1946)

Considerations of artistic quality are completely irrelevant to events like Sensation, in large part a legacy of our culture’s mindless love affair with the avant-garde. A commonly admitted idea, which resurfaced during the controversy, is that all important new art always or generally shocks, and therefore is rejected by the established taste. Following that train of thought, important new art should and sets out to shock, that being provocative and transgressive ( – formerly called obscene and blasphemous) is the very raison d’être of art.

Glenn D. Lowry, the director of the Museum of Modern Art, wrote: “To work with contemporary art is to understand that new ideas require a great deal of patience and openness.” I don’t completely agree with the fact that art of the past challenged established taste. On the contrary, throughout most of history, art has reflected and reinforced established taste. Moreover, if it is sometimes true that “artists reviled or forgotten in one era become revered in another,” the opposite is also true. Some artists revered in one era are reviled and forgotten in the next. Lastly, Mr. Lowry harps on our society’s “fear of the new”. The fact is that our society is addicted to “the new”.

Is what is displayed in the exhibition Sensation new? Anyone familiar with the history of Dada and Surrealism has seen it all before.

“I “made up” the putrefaction of the donkeys with great pots of sticky glue which I poured over them. Also, I emptied their eye-sockets and made them larger by hacking them out with scissors. In the same way, I furiously cut their mouths open to make the rows of teeth show to better advantage, and I added several jaws to each mouth so that it would appear that although the donkeys were already rotting they were vomiting up a little more of their own death.”

Duchamp pointed out that anything could be art. All it took was to get people to agree.

“Today everybody innovates. Deliberately, methodically. And the innovations are deliberately and methodically made startling. Only it now turns out not to be true that all startling art is necessarily innovative or new art… It has become apparent that art can have a startling impact without really being or saying anything startling – or new. The character itself of being startling, spectacular, or upsetting has become conventionalized, part of safe good taste.”
– Clement Greenberg (1969)