In January, we were approached by a platform named ScribersHive whose intention is to provide young writers, artists and minorities a platform on which they can post content such as articles, artwork, and photography. What really struck me the first time I visited their website was how strong their message was and how little it was reflected throughout their website.
We were dispatched into teams, mine was a group of four, including myself, of which I quickly took lead. First came the writing of the brief and understanding that they were targeting a young audience and were aiming for something bold, innovative and creative.
I started on the research and analysis of their current website, how its presentation and how you navigate it as a user. I made annotations on everything that was or wasn’t working, what could be improved and how. I had a look at what was being made elsewhere, Medium offered a clean and elegant look, while Wired seemed bolder, more youthful. I also had a look at the symbolism of the bee for the logo, what logos were already in use with a bee or a hexagon in it. The research phase was rather long and at the end of it, I had gathered quite a lot of information but had no idea as to where I should start. 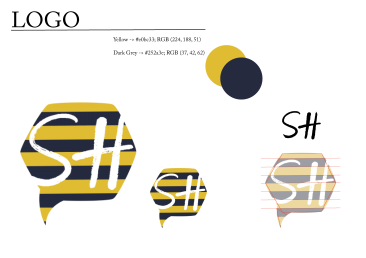 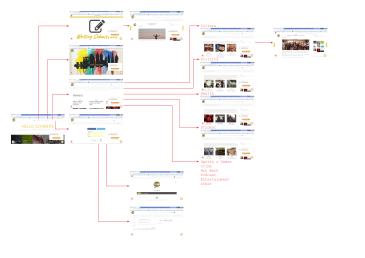 I had an idea of the feel I wanted to give and the message I wanted to send. From Medium and Wired, I had retained two different approaches which I hoped to mix together and bring to ScribersHive elegance and professionalism, but also youth and a sense of friendliness. I wanted to play with that duality in order to give their audience something professional which could benefit them as young artists and/or authors in order to get their work out there, but also give them a community, a family in which they can strive, have fun and find comfort in. The word ‘community’ was my guideline through the whole project, other words such as ‘network’ and ‘platform’ added themselves to it, but ‘community’ was the main idea I wanted to develop.

I settled for starting with the logo. I made several attempts at a logo, played with hexagon shape to keep that idea of the hive, changed the colours for a bright, more vibrant yellow, tried different typographies and got very frustrated. A member of my group came up with the logo to which I added the typography with the intention of mixing the round edges of his design and serif typography. 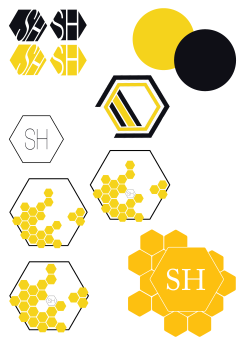 I moved on to the website afterwards and redesigned their first page with classic and necessary functions, most of which they already had. What I noticed on their current website and the way they talked about it is that their main focus was the content, but very few attention was given to the users. I decided to rebalance that and give the user as much importance as the content as well as change the way one navigates the website, I decided to connect people together and invite them to engage with each other as users instead of solely doing so through the content posted. That led me to create what I called the Highlights page-which is the three hexagons on the homepage-, the first one being #SuccessStories, and the second and third one being Author/Artist of the Week.

For #SuccessStories, I decided to introduce a hashtag through which people could share their stories, connect with other users and help each other out.
As for Author/Artist of the Week, the idea was to introduce a bit of friendly competition that would encourage people to post and share their work with the promise of a possible reward, the first one being featured on the highlights page, and the second could be vouchers, merchandise, invitations to events and workshops or internships.

To further bring the user forward and improve their experience on the website, I redesigned the profile page and introduced new functions such as the ability to follow users and topics, be followed, favourite work, and the inbox. I thought of the profile page as a portfolio for the user to use and design as they please. The box in which the content posted appear can be reorganised and rearranged depending on what the member wants to put forward.

On the left side are the statistics showing the number of people you follow or that follow you, and what you saved in favourites. There is a biography, a gallery and suggestions of other similar users to allow people to create connections and orientate themselves towards content that they like. The inbox is an added feature which complements the comment section, I added that to give members the opportunity to engage in conversations with others, but also so they could receive updates on new content posted by someone they follow.

As I was working on the profile and user interface, I redesigned the “Submit Post” and “Submit Artwork” pages so it would be consistent with the rest of the work. I finished the project with how I imagined the inbox would look like. 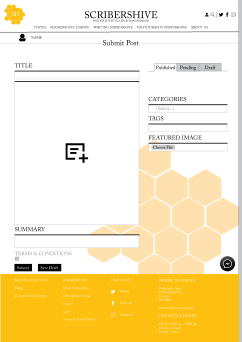 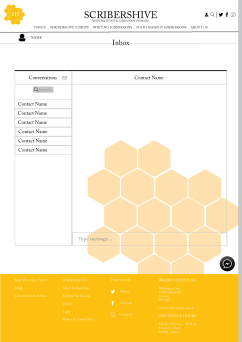 I met up with my team to give them their parts, we were rather late on schedule so I was apprehensive, despite that I believe that we did a good job with the presentation to the client. It flowed nicely and clearly, I’ll admit the questions towards the end were destabilising at times, it was enlightening in a way as several of these brought to light problems we hadn’t truly thought of.