The day after pitching our presentations, the client gave us feedback regarding which project they’d chosen. Titled ‘The Gift’, it is an installation of a bear standing over a bench. The bear is a metal structure covered by thousands of cut milk bottles attached with cable ties. The seat and the plinth on which it stands are built using wood recycled from a landfill. Additionally, the event needs proper marketing. This includes a physical and a digital book, posters, a website page, AR, videos and the launch event. We got into teams to get all of this done by the 12th of December.

I’m working on the print version of the book. The story written by Ellice, whose idea it is, is as follows: 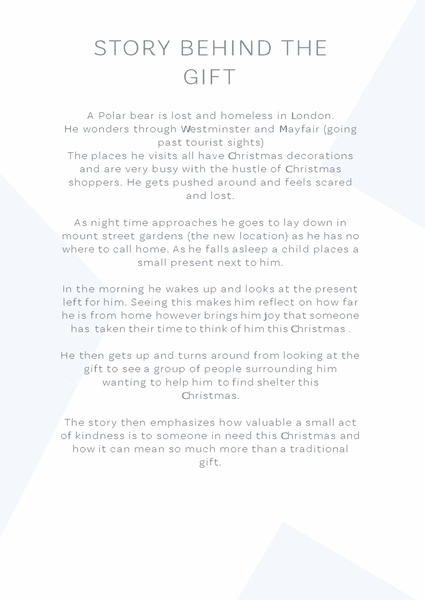 We broke the story down into three main parts based on emotions: Anxiety, loneliness and warmhearted. These ‘chapters’ of the bears’ journey helped us articulate the story into 12 pages.

With the final version of the story in hand, we moved on to the storyline to establish how the story would articulate itself on paper. The first section would be characterised by a large number of objects and warm colours to create a stifling environment. In contrast, the middle part would have just enough decor to know where it takes place and colder tones to convey the bears’ solitude. Lastly, to bring this 12-page storybook to an end, the bear is surrounded by a small gathering of people in subdued warm hues, a careful balance between the previous scenes.

We were going to use the risograph at uni to print it, which meant a colour palette limited to two tones with plays on juxtaposition and opacity to create shades and dimension. Since the project is sustainable, the ink used and the binding have to be eco-friendly, which means either hand-stitching around 50 books in less than a month or folding an A3 paper. We went with the folding option but had to reduce the number of pages to 8. We simplified the narrative and only kept what was essential. 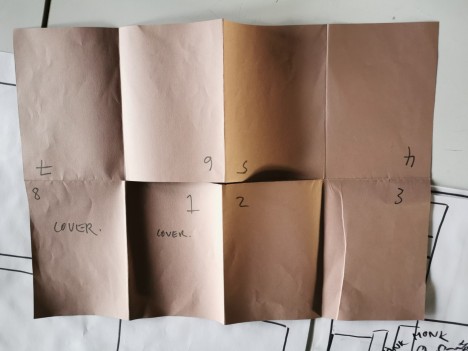 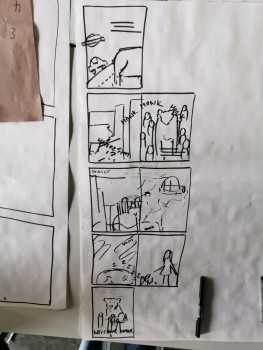